Reflectance data for Acktar black light-absorbing coatings have been incorporated into the libraries of the major optics simulation software packages Zemax and TracePro and soon will be incorporated into ASAP and FRED.

A central application of these simulation packages is in design to reduce the negative effects of stray light from bright objects outside the field-of-view and from thermal emission within the system itself.

Stray light which is not suppressed and reaches the detector of an imaging or measurement system will cause deterioration of image quality or reduced sensitivity respectively.

In some applications – such as satellite attitude-control star-trackers – this is an absolutely critical issue.
Careful design together with the use of black light-absorbing materials are the tools used to minimize the effects of stray light. Acktar black coatings offer light absorbing performance which is far superior to that of presently used materials and are available for application across the optical spectrum.

Acktar is claiming that their coatings are the only coatings in the industry that deliver reflectance of <1% from EUV thru VIS-NIR-MWIR to LWIR.

The high optical performance is combined with other unique properties such as zero outgassing, no particulation, zero fluorescence, operational temperature from 4K-625K, high LIDT, biocompatibility and thickness of less than 10µm.
The Acktar thin film can be deposited on any surface: glass, polymers, ceramics and metals, which makes the coatings ideal for a variety of applications from space hardware to DMD projectors, laser beam dumps, automotive camera systems and even medical applications.

Add to that the fact that Acktar black coating process and equipment fit large-scale production of millions of coated components such as black apertures for mobile phone camera, and it makes Acktar black the ultimate black.
The benefits of the Acktar coatings can now be incorporated in optical system design from the very beginning.
Paul McClellan, optical engineer at Breault, who manages Acktar’s coating data on ASAP, reports that Acktar coatings’ measured data will appear in the next release of ASAP software product, expected in January, and explains how the coating data is used on their software tool: “our customers will be able to drag the name ‘Magic Black’, from our scatter library window and all the necessary coefficients will be inserted into their ASAP document, simple as that.” 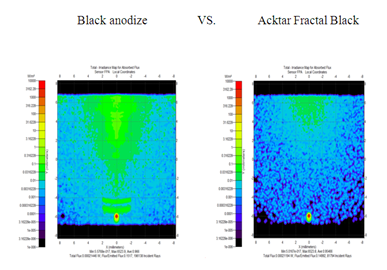 The left image shows reflections (green) in a system coming from black anodized mechanical spacers between the lens elements. The right image, with Acktar Fractal Black coating instead of black anodize shows the dramatic reduction in stray light.

A new version of FRED software product, expected in early December, will also include Acktar coatings’ BSDF data. Richard Pfisterer, co-founder and president at Photon Engineering, developer of FRED program said: ”I believe that Acktar has made a significant contribution to modern optical engineering and I continue to wish them every success.”