Home About Us Projects 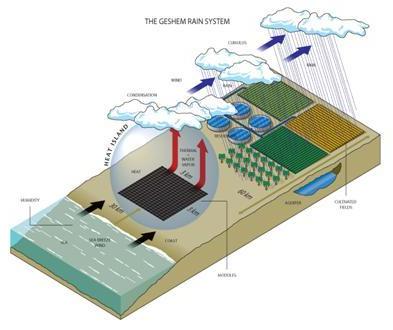 Onshore winds carry humid air which is heated over the “heat islands” made of high emissivity black foil. While plants grow simultaneously under the foil.

The heated air rises (increase of 40 degrees) and cools down, water vapour condenses and clouds are created. When the clouds are heavy enough they release the moisture as rain over the drought areas.

The energy from sunlight is absorbed by the material and then radiated back into the air to heat the lower atmosphere with minimal loss into the ground.
The heated air rises taking water vapor high enough to “condense and form clouds” that will produce out-of-season rain.